a role model for girls: Ariana Grande vs. Miley Cyrus

Last night I was watching SNL. Not the current one, because I don’t have cable tv under this rock. The one from two weeks ago with Chris Pratt and musical guest Ariana Grande, because I do have cable high speed internet. As I watched Ariana Grande perform I was comparing her singing and her outfits and deportment against what I have seen of Miley Cyrus. 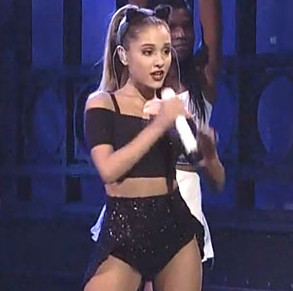 I often joke about living under a rock. I don’t really stay abreast of pop culture. I didn’t know that Ariana Grande existed until this summer when her brother was a house guest on Big Brother. I’ve only recently started listening to Miley Cyrus because the echos of criticism had finally reached me under my rock and I was curious what all the fuss was about. And I stated recently in why do people don’t like Miley Cyrus? that I like some of her music and I’m not sure why she is so hated. 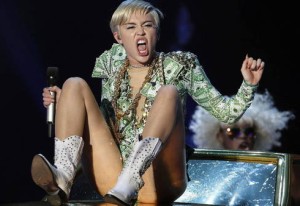 Here’s what I’m getting at though: if I had a daughter, or if I was a young teenager/woman today, who would I rather have as a role model? People think Miley Cyrus is overtly sexual to the point of being obscene and that offends them. Ariana Grande is pretty and uses sex appeal in a more broadly palatable way. Both of her outfits on SNL were somewhat revealing and sexy, especially the first one. She wore black cat ears with both. So her styling was going moderately in the same direction that Miley has gone extremely towards. 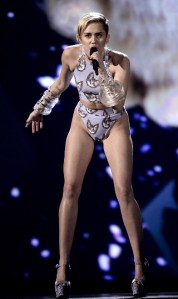 When I look at the two of them, Miley Cyrus is portraying a stronger woman. A woman in control. An independent woman having her own way. Ariana Grande has a softer, more demure, more submissive public image. So for younger me, or my imaginary daughter, I’m actually choosing Miley Cyrus as the better role model between the two of them. Surprised much?

I want girls to be empowered and embrace their individuality. I want them to wear whatever they chose and never be told they are asking to be objectified or abused. I want girls to go out into the world feeling like if they were ever threatened, they could kick some serious butt and come out on top.

And just between these two, Ariana Grande and Miley Cyrus, I’m saying I would chose Miley Cyrus as a stronger and more fearless role model. I know, call me crazy. What do you think? Do you agree with me, or do you think I’m nuts? Who would you choose for a female role model in music today?

57 comments on “a role model for girls: Ariana Grande vs. Miley Cyrus”